The history of Château Ducru-Beaucaillou dates back to the early eighteenth century, more precisely in the year 1720. It is so named because of the beautiful (and large) pebbles characteristic of its unique wine terroir. In an original way in Bordeaux, this Victorian style Château is built directly above the barrel cellars. Classified 2nd Classified Growth in 1855, the property is owned by the Borie family since 1942 which perpetuates the same concern for excellence.


Planted with 65% Cabernet Sauvignon, 25% Merlot, 5% Cabernet Franc and 5% Petit Verdot, Chateau Ducru Beaucaillou produces a wine considered by many to be the quintessence of the Médoc. The attentive care of Bruno Borie, its owner, the quality and the meticulousness of the care lavished on the vine and the draconian selection of the grapes are all elements that can explain this success. Jacques Boissenot, and his son Eric, are the consulting oenologists of Château Ducru-Beaucaillou. The harvest is entirely manual and the vinification evolves each year according to the typicality of the grapes harvested. In addition, vinification is always mastered and modern, carried out in a concern for perfection. 3 sorting tables, including one at the vineyard, plus an optical sorting machine allowed this year to work grapes with an optimum quality.

At the tasting, Château Ducru Beaucaillou offers a wine with aromas of cedar and the texture of a first-growth breed. 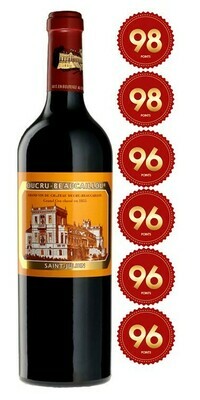