The fate of Le Bon Pasteur is then closely connected to Michel Rolland who represents the spirit of the château for 40 years. Michel Rolland was born in 1947 on the edge of the Pomerol appellation. Steeped in nature, he spent his childhood and teenage years on the family property, Le Bon Pasteur in Pomerol-Maillet. Perhaps this explains his love for the land in general and in particular for the vine.

After technical studies at schools of agriculture and viticulture, he was accepted into the Faculty of Oenology in Bordeaux. It’s then – in 1968 – that he met Dany, who was to become his wife. From that point forward, they stayed by one another’s side and pursued their career together. In 1973, the couple associate with the owners of a lab in Libourne and that is where it all began. At the time, oenologists were more office practitioners than field professionals!
This was the time of modern wine’s infancy… Michel Rolland crisscrossed the region visiting the properties. When his father Serge Rolland died in 1979, he took over, with his mother, the management of the homestead while he continued his work at the laboratory.
It is precisely in this family property he developed the recipes and techniques that have made it successful: search for the optimal maturity of the grapes, green harvesting, plot selections, sorting the grapes before and after destemming, whole grape vinification, pigeage extraction, use small tanks from 15-70 hectolitres, equipped with a thermal control system since 1987. An innovation in the appellation.

Every step has been considered and adopted from the vineyard to the bottling, everything has been designed to preserve the rich complexity of the different plots of Le Bon Pasteur. 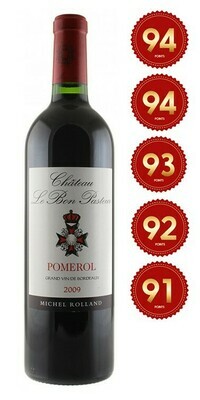