The Bartons are an old family from Ireland. Part of their history starts in Bordeaux' region in the 18th century when Thomas Barton, who was in France for trade, got interested in the wine and settled his first company―which would later become Barton & Guestier―in Bordeaux. He quickly became the first trader of Bordeaux and built up a solid reputation with a faithful clientele in all Europe. However the law of escheatage, abolished in 1819, held him back from acquiring his own vineyard. It is only in 1821 when Hugh Barton, his grandson, purchases Château Langoa, and in 1825, a part of the domain of Léoville, that the foundations of the wine dynasty are laid in the Médoc.

The châteaus Langoa and Léoville Barton enter the 20th century under the leadership of Ronald Barton who restored the vineyards' and wines' reputation after the 2nd World War the domains had suffered a lot from. Having no child, he decided to bequeath the domain and the trade house to his nephew Anthony to make sure that the property built by his ancestor stays in the family.
Classed 2nd and 3rd Grand Cru in 1855, Léoville Barton and Langoa Barton are at the heart of the prestigious Saint Julien appellation on a gravelly soil and a clayey subsoil. They respectively spread over 50 and 17 hectares. The planted grape varieties are 75% Cabernet Sauvignon and 25% Merlot complemented with some Cabernet Franc for Langoa and 55% and 35% of the same main varieties for Léoville. The family keeps an important proportion of old vines. These are replanted by a rhythm of 2 hectares a year, no more, to maintain a constant quality and the character peculiar to Saint Julien's Cabernets.
Both châteaus benefit from the same care and from the same vinification techniques. Their difference of characters lays in the terroir, “this mystic blend of the soil, the climate and the work of the men”, as François Bréhant, the technical manager, describes it. Their wines are a beautiful representation of the Saint Julien appellation, well-balanced, with beautiful subtle aromas. 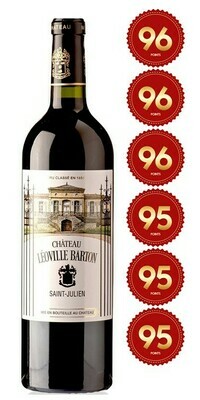