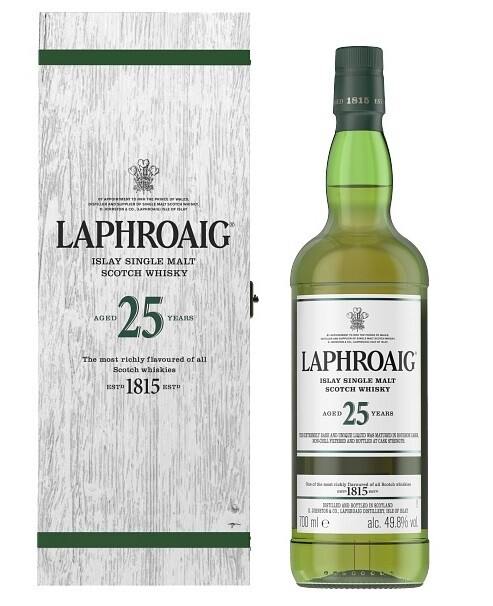 Supremely smooth and utterly exquisite, Laphroaig 25 Year Old Single Malt Whisky is a dram worth savoring. It's aged for a quarter century in a combination of large Oloroso sherry butts and ex-Bourbon barrels, proving that good things are worth the wait. This mellow single malt Scotch has the distinctive flavor of Laphroaig — peat smoke with a medicinal edge — met by creamy vanilla flavors from American oak and spiced apple from the sherry casks.


A long, warm finish leaves a lasting impression. It is bottled at cask strength, which means it isn't watered down before bottling. Usually you would only sample whisky this powerful at source. If you find the straight-from-barrel flavor overwhelming, temper it with a splash of water or a few ice cubes.

Laphroaig 25 Year Old Cask Strength is proof that good things take time. Slowly aged in ex-Bourbon barrels and Oloroso sherry butts, this Islay Scotch spends a quarter century resting in our warehouse on the edge of the Atlantic Ocean. Once it's ready, we bottle it without diluting it. Its lengthy time in barrel adds notes of sweet vanilla and spiced apple to the signature Laphroaig flavors of medicinal smoke and seaweed. Gentle sherry sweetness, imparted by the European oak Oloroso casks, helps to temper the powerful peatiness, and gently transitions into a fruity finish. This exceptional Scotch makes an ideal gift for any single malt lover. It is best served neat, over ice or with a small splash of water.

Laphroaig is one of the few distilleries that still uses a traditional malting floor, and that's where this 25 Year Old single malt Scotch begins its life. The malted barley is dried and infused in the thick blue smoke of the peat-fired kilns before being mixed with the crisp waters of the Kilbride Stream. Once it's distilled, the spirit then spends 25 years slowly maturing in oak sherry and bourbon barrels where it gains complexity. Once a quarter century has passed, it's bottled at cask strength — so each sip tastes as it would if you sampled it at the distillery.

The slow and steady aging of Laphroaig 25 is a testament to the distillery's history. It opened on the rugged island of Islay in 1815. For more than two centuries, our master distillers have worked to perfect the inimitable flavor of our single malt Scotch. With its concentrated flavors and smooth finish, this 25 year old cask strength expression does them proud.