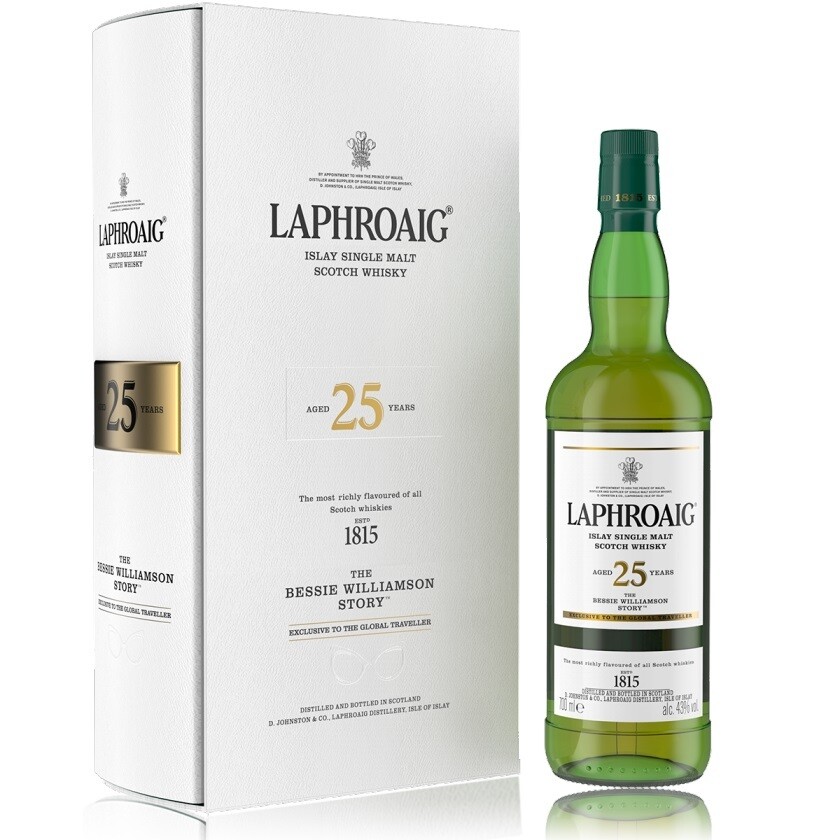 This super-premium single malt Scotch celebrates the life of Bessie Williamson, the first woman to own and run a Scotch whisky distillery in the 20th century. She came to embody everything we know and love about Laphroaig; warm and rich with that unmistakable Islay character. Aged in refill barrels and American oak hogsheads, the spirit holds its own as it slowly mellows over a quarter century.


Aged for a quarter century, this expression of our unmistakable single malt combines characteristic peat smoke with flavors of acacia honey, black pepper and sweet herbs. Exclusive to global travel retail outlets, and packaged inside a hardback book, it's a must-have for any collector.

This Islay whisky celebrates the life and times of Bessie Williamson. The first woman to own and run a Scotch whisky distillery in the 20th Century, she more than held her own in a male dominated industry. Warm, rich and with unmistakable Islay character, this expression embodies everything we know and love about Laphroaig and its first female distillery manager.

The focus of this expression is on the natural character of this exceptional Islay single malt. It's aged in refill barrels and American oak hogsheads, which impart less of their own flavor. They simply allow the whisky to gently mellow over time. This allows the natural features of Islay — such as the peat that the malted barley is toasted over and the crisp waters of the Kilbride stream — show their effects. As a result, this rounded single malt speaks of the true nature of Laphroaig.

Bessie is just one of the incredible people who have contributed to making Laphroaig what it is today — a richly flavored Scotch whisky. Since 1815, our master distillers and blenders have been innovating new ways to mature our single malts.

The bottle is packed inside a hardback book, telling the story of Bessie and her role at Laphroaig. An exceptional gift for whisky enthusiasts, it should be served neat or over ice.