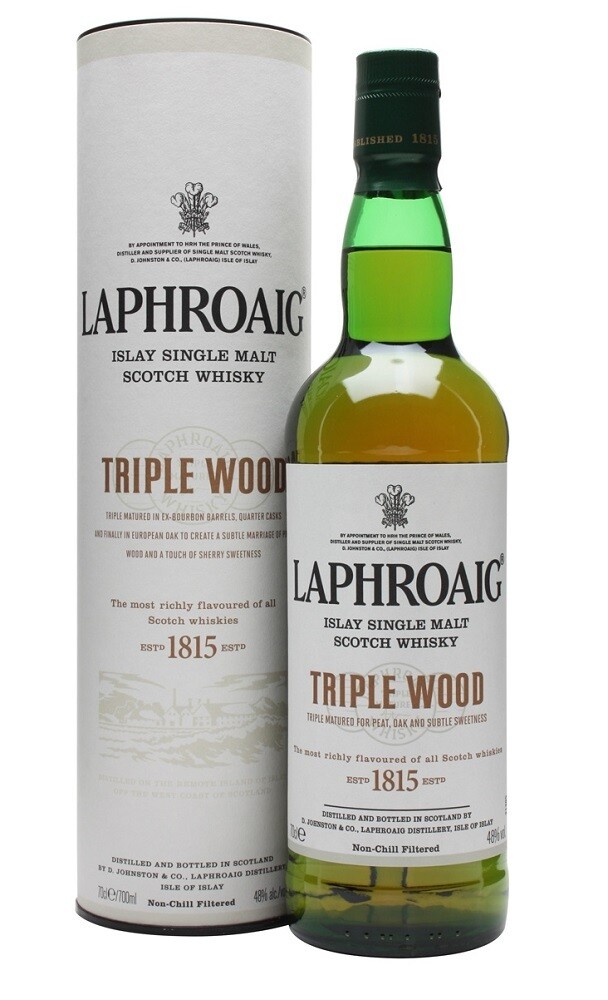 SKU AWS434806
RM575.00
In stock
1
Product Details
A true crowd-pleaser, Laphroaig Triple Wood is a softer expression of our classic Islay Scotch. It goes through a three-stage maturation process which adds notes of dried fruit, spice and nuts to the unforgettable taste of peat smoke and salt that Laphroaig is known for. Truly powerful, this punchy whisky has a creamy consistency with flavors of raisins and apricots. This richly flavored Scotch whisky should be served neat, over ice or with a dash of cold water.

Laphroaig Triple Wood begins the same way as our other expressions. First the malted barley is dried and toasted over a peat-fuelled fire, which lends a subtle smoky flavor. Next, it's mixed with the waters of the Kilbride Stream and distilled into pure spirit. This is added to ex-Bourbon barrels — the insides of which are charred to impart flavors of sweet vanilla. Our master distillers then sample the spirit from multiple barrels in our storehouse, and choose the most suitable ones for Laphroaig Triple Wood.

Finally, for the last stage the spirit is moved to large ex-Oloroso sherry butts and left to rest in our warehouse, on the rugged shores of the Atlantic Ocean. As it slowly matures, the whisky becomes even more mellow and picks up notes of sherry sweetness.

This innovative process was dreamed up by Laphroaig's master distillers, drawing upon the skills, techniques and passion of those who came before them. Laphroaig Single Malt has been continually improved upon since 1815 when the distillery first opened Islay, an island which sits off the west coast of Scotland at the far reaches of the Scotch whisky map.