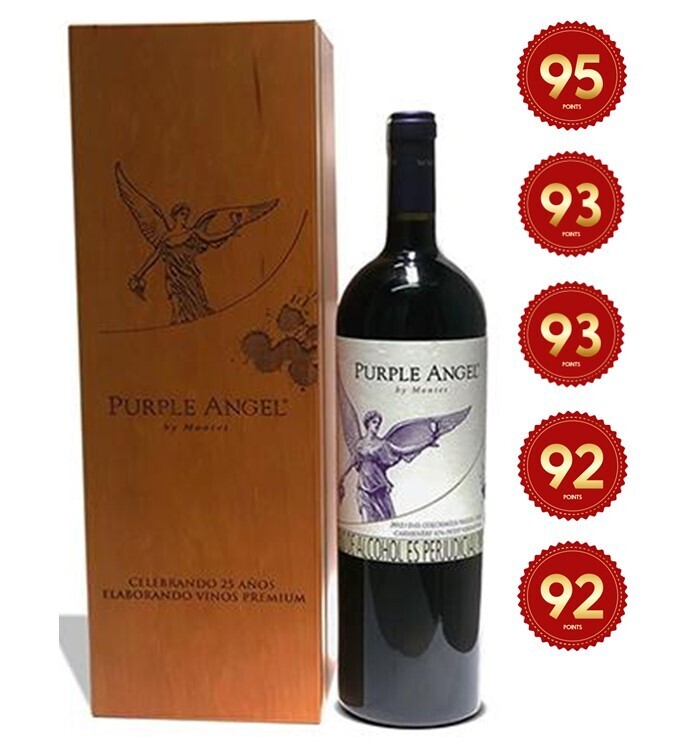 This superb wine represents a whole new dimension for Carmenere, the long-lost grape variety that recently resurfaced in Chile after being presumed extinct in Bordeaux, its original home. Purple Angel, has been recognised as Chile's best Carmenere. Critics all over the world have named this wine a 'wine from another planet' .


The vineyards that produce Purple Angel are located at our Finca de Apalta and El Arcángel de Marchigüe estates, in the Colchagua Valley. Here the soils are of granitic origin and vary in clay content, amount of organic matter, depth, and, notably, types of fluvial and glacial stones, reflecting the tremendous diversity of soils in our vineyards. Apalta has heterogeneous soils with some blocks highly influenced by the nearby Tinguiririca River and others produced by the erosion of the mountains high above. Soils tend to be deep on the plain and shallower at the foot of the mountains and on the higher slopes. The Carmenère vineyards for Purple Angel are optimally planted in lower zones, where the soil is deeper and moisture retention is moderate. Marchigüe is flatter, with low hills and moderate slopes.

100% of the components of this wine were aged for 24 months in new French oak barrels. The 2012 intense carmine red in colour with tremendous aromatic potency. Complex and bursting with character. Ripe red and black fruits such as plums, blackberries, strawberries, and cherries predominate on the nose, complemented by aromas of pastries and nutmeg with a touch of cinnamon and jam. The contribution of French oak is distinguished by a delicate aroma of caffe latte, toffee, and caramel followed by notes of toast from the first-use oak. The palate is nicely balanced with very well-rounded tannins and an outstanding central nerve from the Petit Verdot. This is a creamy wine with a sensation of flavors that echo its aromas and lead to a long and seductive finish.