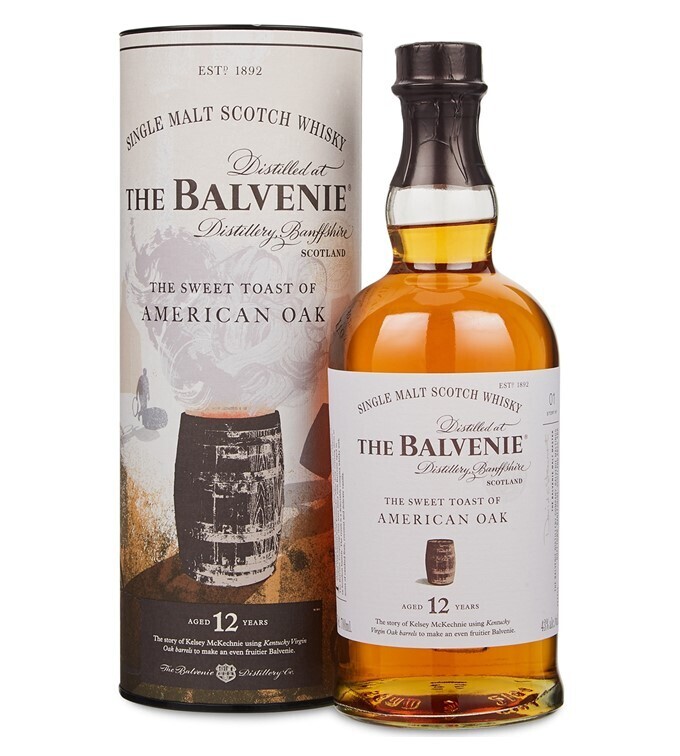 Inspired to produce an even fruitier, sweeter Balvenie, Apprentice Malt Master Kelsey McKechnie had the bright idea to import Virgin Oak barrels from Kentucky. After deep toasting them at The Balvenie Cooperage they were filled with Balvenie aged in ex-bourbon barrels. The result is a delectably complex whisky with notes of candied fruit, coconut, and delicate vanilla.

Lusciously malty with some sweet fudge, followed by citrusy and oak vanilla aromas with layers of spicy oak notes of ginger and cinnamon. Candied orange and lemon peel, vanilla toffee and butterscotch, layers of blossom honey, some melted brown sugar, and oak spices at the end. Rich and malty finish with gentle waves of oak vanilla and subtle spices.

The seed quickly developed into an ambitious plan. Supported by the expertise of Malt Master David C Stewart, Kelsey sourced Kentucky Virgin Oak barrels from Kelvin Cooperage in Louisville, Kentucky. A family-run business since 1963, Kelvin use the finest quality oak for their casks, toasting each one uniquely in the open fires. Paul McLaughlin, of Kelvin Cooperage, explains: “The only wood we burn on the fire is white oak. And the smell, you’re really activating all the vanillins within the American Oak, it’s kind of a nutty, marzipany smell, like freshly baked bread."

Once the barrels safely arrive on Scottish soil, the pre-toasted casks are given an extra deep toast in The Balvenie Cooperage to drive the heat further into the wood and bring out as much flavour as possible. As Head Cooper, Ian McDonald asserts: “We’re adding extra life and flavour into the wood. After it’s spent 6 weeks in transit from Kentucky to Dufftown, our signature Balvenie burn refreshes the wood, bringing out all the flavour, colour, vanilla.”


And then the wait begins. With a smile Kelsey explains: “In whisky nothing happens overnight.” The toasted casks are filled with whisky aged primarily in ex-bourbon casks, before being laid down to mature for a few more months, a process known as ‘cask finishing’ and pioneered by Kelsey’s mentor, David C Stewart. “In the glass this is a complex whisky with incandescent notes of caramelised fruits, delicate vanilla and oak."