The ‘youngest’ of Bushmills single malt, think of this as the gateway to the greatest single malt whiskeys of the world. Bushmills Single Malt Whiskey 10 year old is triple distilled from 100% malted barley and matured for a minimum of 10 years in former Sherry casks and bourbon-seasoned casks which gives it its honey, vanilla and milk chocolate aroma. Its exceptional complexity is only matched by its approachability, its smoothness. This personal favorite of master blender Helen Muholland can be served neat, over ice or if you’re feeling a little more adventurous, try it frozen. We call it the perfect ‘summertime whiskey,’ when poured over two ice cubes.

very elegant and simple style of Irish Whiskey that leaves you with an exceptionally smooth finish. Triple distilled from 100% malted barley, it has the distinctive Bushmills light fruity aroma that travels over the lip of your tumbler to deliver 10 years of maturation mostly in Bourbon seasoned barrels.

Bushmills is the oldest licensed distillery in Ireland, with a history that dates back to 1608 when King James I granted a license to Sir Thomas Phillips to distill whiskey in the area of the River Bush in County Antrim in what is today Northern Ireland.

Whiskey has been distilled in the area since at least the 13th century, when an Irish general supposedly held a drinking session before going into battle with his troops. Bushmills itself was not officially founded until 1784, and the distillery building was constructed in 1885 and has been making the famed whiskey ever since. 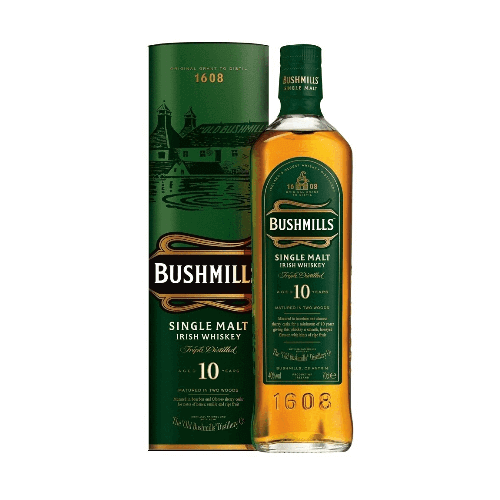