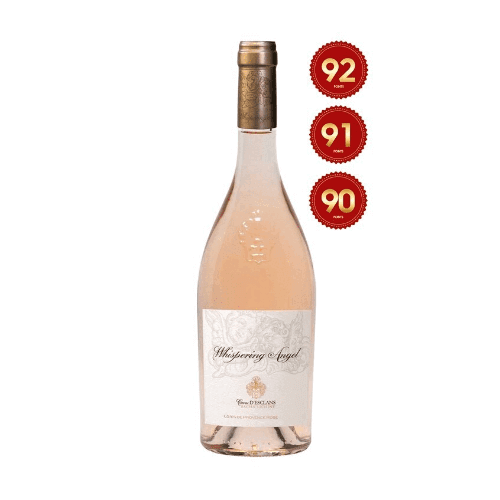 Whispering Angel is today’s worldwide reference for Provence Rose. Made from Grenache, Cinsault and Rolle (Vermentino), its pale color is pleasing to the eye and draws one in. The rewarding taste profile is full and lush while being bone dry with a smooth finish. Highly approachable and enjoyable with a broad range of cuisine, Whispering Angel is a premium rose that you can drink from mid-day to midnight.
Created by Sacha Lichine following his acquisition of Chateau d’Esclans in 2006, his vision was to create the greatest roses in the world igniting the “Rose Renaissance”. Sacha introduced new and innovative winemaking techniques to Provence which revolutionized the styles of roses being produced from this region. This led to the creation of Whispering Angel, a world class rose which presents both ease and accessibility making for enjoyment and pleasure.

Brilliant peach skin. Red berries and pit fruits on the nose, and a floral nuance in the background. Silky and open-knit, showing good depth as well as energy to the red currant and nectarine flavors, which pick up a refreshingly bitter orange zest quality on the back half. Finishes long and juicy, with a repeating floral note and subtle grip. Flavorful and intense on the medium- to full-bodied palate yet so very restrained and elegant. Super-value wine as always.

Chateau d’Esclans is located on an exceptional site, on elevated land near the Gorges de Pennafort, twenty five kilometers northwest of the ancient Roman city of Frejus on the Mediterranean coast. The first traces of the chateau’s site date back to Gaullist times during which its location served as a lookout point to spot intruders coming by boat into the Gulf of Frejus. The chateau’s cellar structure or foundation (known today as the oldest in the region) housed an original Chateau that was given by the Comte de Provence to Gerard De Villeneuve, in 1201. The current chateau, inspired by Tuscan Villa design, was built during the mid 19th century.

Chateau d’Esclans lies in the center of the Department of the Var, where the majority of Provence AOC rose is produced. The land was occupied as long as 2500 years ago when it was probably used as a lookout point for intruders sailing into the Gulf of Frejus. The original chateau—of which now only the cellar remains—dates back to before the 12th century. In 1201, Gerard De Villeneuve, part of a wealthy family from Marseille, took ownership of the chateau and the majority of the surface area of the Vallee d’Esclans that would eventually be sold off in lots. Two brothers, Sauver Louis Ranque and Francois Alexandre Ranque, were the next to own the chateau, known then as Terre d’Esclans.
In 1875, they sold the property to Joseph Toussaint Caussemille, who manufactured wooden matches near Marseilles. In 1955, the Perraud family owned the property until 1994. At that time, it was purchased by a Swedish pension fund that produced a small amount of wine and the remaining grapes were sold to neighboring winemakers. Sacha Lichine aquired Chateau d’Esclans in 2006. Today there are 108 acres (44 ha) of vineyards. The total proprety has 659 acres (267 ha).
The primary grape grown on the property is Grenache followed by Vermentino. Other grapes include Cinsault, Merlot, Mourvedre, Syrah, and Tibouren. The chateau is known for its old Grenache vines which produce grapes that offer greater concentration of flavor than do the younger vines. As the elevation to where the lots are situated increases, so do the age of the vines. At the highest elevated lot vines are as old as 90 years.