This is the great wine of the Castello Nipozzano, from the vineyard Mormoreto planted in 1976. The first vintage was from the 1983 harvest, and since then has been produced only in the most favourable years. It was not produced from the harvests of 1984, 1987, 1989, 1992, 1998 or 2002. Cabernet Sauvignon, Merlot, Cabernet Franc, and Petit Verdot have, over time, formed an intimate bond with this terroir and now bring out all of its unique qualities. It is a wine of great depth, opulent and refined, that you can cellar for many years.

A deep ruby announces Mormoreto, almost opaque in its concentration. The nose is ultra-complex, delivering inebriating draughts of wild blackberry, raspberry, redcurrant, dried plum, dates, and wild red berry fruit, delicately lifted by floral impressions of sweetbriar and violets. Gradually emerging to deepen the rich bouquet even further are spicier nuances of vanilla, cocoa powder, tobacco leaf, and roast espresso bean, which act as a delicious foil to pungent notes of balsam and chlorophyll. A crisp, nervy acidity complements a suite of silky tannins, and both contribute to a palate that is notable for its warmth and roundedness. A finely-balanced, leisurely progression culminates in a lengthy, subtly-aromatic finish.

The history of the Frescobaldi family starts over a thousand years ago and is closely connected with the history of Tuscany, with the wine involvement dating back to at least 1308. At the high point of medieval Florence, the Frescobaldi’s spread their influence as bankers, earning the title of treasures to the English crown.
Today, they intend for the different family estates, with their vineyards, to be the expression of this diversity and for the wines to reflect each individual terroir, respecting their nature and authenticity. They own 11 estates in Tuscany, all running independently. That includes Ornellaia & Masseto, 2 of the most revered Super-Tuscan wines.

Be the first to review “Frescobaldi Nipozzano ‘Mormoreto’” Cancel reply 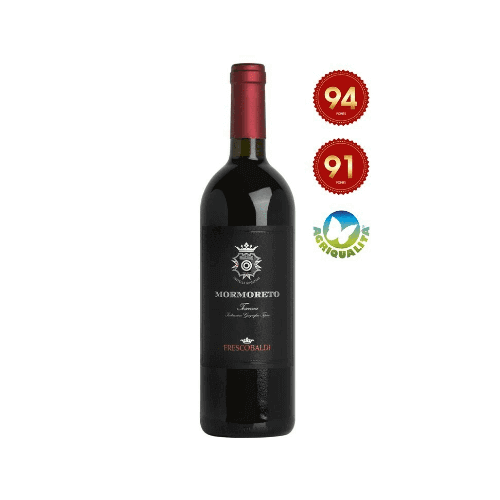