The Matusalem Rum company was started by the Camp brothers in 1872, originally in Cuba, but they are now based in the Dominican Republic. The key to Matusalems’s Gran Reserva rum’s complexity is the Solera aging process, where various mature rums are carefully blended together, with the main component being 15 years old. This is a classic example of aged Cuban rum.

A soft nose of toffee and butter prepare to a satiny entry leads to a round, fruity-yet-dry, medium-bodied palate with praline and brown spice notes. Finishes with smooth spicy oak flavors. A finely balanced, very silky, aged rum.

In 1872, the founders, Benjamin and Eduardo Camp and their partner Evaristo Alvarez believed that the key to making the rum with the finest flavor was under a process of patient aging. The name, Matusalem, derives from the old Spanish proverb, ‘This is older than Matusalem’, Matusalem being the patriarch of the old testament who lived for 969 years.

The period that went through the mid 30’s and early 50’s, was an era in which Cuba was the preferred destination for tourists, who were attracted by the island’s charm and its exciting nightlife. During this “Golden Era”, Matusalem was the most popular rum in Cuba, sharing a market share of over 50%. It was known that the gold rum market was lead by Matusalem, while a bat competitor controlled the white rum market. 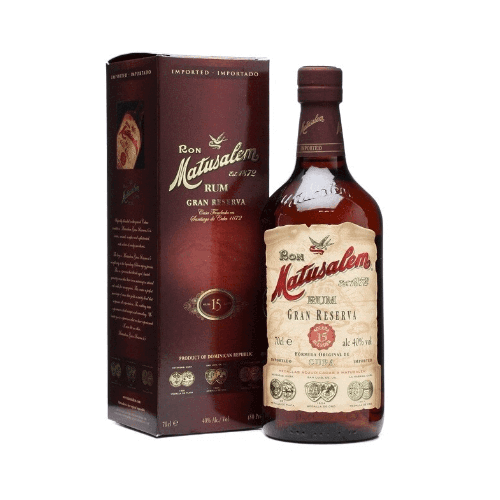