Developed to offer a non-alcoholic version of rum-based drinks, Monin Caribbean bottles a taste of the favourite tipple of pirates, buccaneers and British Royal Navy sailors, who still have a tot of rum presented on special occasions. A distilled alcoholic beverage made from sugarcane by-products such as molasses, rum is largely produced in the Caribbean and Latin America.

Thought to be derived from the words ‘rumbullion’ and ‘rumbustion’, which were slang terms for ‘tumult’ or ‘uproar’, they bring to mind rum’s colourful associations with fractious men fighting in island tippling houses. Other names for rum include ‘Nelson’s blood’, ‘kill-devil’, ‘demon water’, ‘pirate’s drink’, ‘navy neaters’ and ‘Barbados water’! Today rum is used to flavour cakes, ice creams and fruits, which can be macerated in rum. The nose of Caribbean rum aged in oak barrels and the sweet rum taste with notes of fruit of Monin Caribbean syrup will create ‘rumbustious’ coffees, non-alcoholic cocktails and dessert drinks.

One of the most well known syrup brands is Monin. Monin syrups are used throughout the world to flavor coffees, cocktails and delicious mocktails.

Be the first to review “Monin ‘Caribbean’ Syrup” Cancel reply 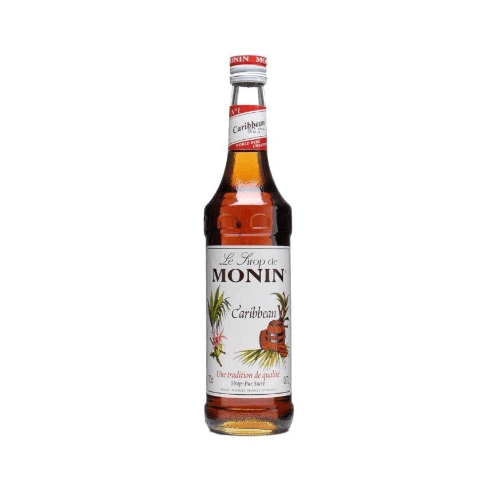