Talisker Storm was 1st released in early 2013 as a no age statement whisky, which was matured in specifically selected refill and toasted American oak casks. An intense and vibrant dram, the Storm offers up plenty of distillery character alongside some smokier depth and complexity. With a classic Talisker profile, a depth of beautiful flavours and a very reasonable price point, this is an ideal single malt for those thinking of exploring the island whisky category.

Spicy, mellow smoke with honeyed sweet maltiness and hints of pepper on the nose. The first taste is rich & sweetly mellow followed by a spicy heat with elegant balance of sweet, smoke & salt, and a clean, warm finish.

Talisker is the oldest Single Malt Scotch Whisky made by the sea on the shores of the Isle of Skye, one of the most remote, rugged, yet beautiful landscapes in Scotland. Few whiskies tell the story of their origin better than Talisker. Its smell and taste instantly connect the drinker with the rugged environment – like a warm welcome from a wild sea. It’s a powerhouse; challenging but adored; once discovered rarely left.

In 1825, Hugh MacAskill of Eigg acquired Talisker House and the north end of the Minginish peninsula on the rugged, beautiful Isle of Skye. Five years later, he and his brother had built what was to become one of the world’s most popular distilleries on the shore of Loch Harport. In fact, by as early as 1898, Talisker was one of the best selling malt whiskies in the UK. Through fire, war and financial crises, this northern outpost – Skye’s oldest distillery – has remained strong: producing consistently fine whiskies which, once tried, are rarely forgotten. 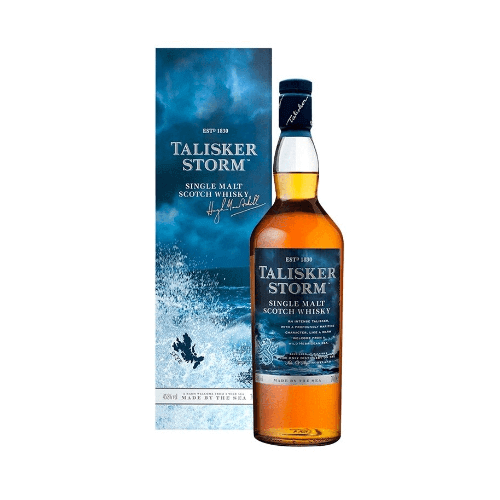